Order your best cuts straight to your home. See if we can deliver to you.

The family butchers delivering high quality meats and foods for over 40 years. Our butcher shops are located in Watlington and Didcot, we have a large customer base across Oxfordshire and the neighbouring counties. We supply high quality meats to our wholesale clients and offer our professional services for private catering hire.

Only the best for

Reasons to shop with us at Calnan Brothers.

Is probably the most flavoursome pork cut due to its fat covering. A very versatile meat that can be used for sausages, roasting and dicing. Traditionally the sparerib was roasted on the bone but in recent years, it is more common to be boned and rolled. A fantastic Sunday roasting joint.

Also known as “bath chaps” is an incredible sweet and flavoursome cut. Has to be braised to get the best flavour.

May be divided into two joints. One of these retains the name ‘hand’, the alternative is known as the 'thick end of belly'. This is an old style roasting joint but in modern times it is boned out for sausages or dicing because of its tremendous flavour.

Even though this is one of the cheaper cuts, it offers fantastic flavour which is ideal for mince and sausages.

Can be used for pork chops, pork loin steaks and is tremendous for roasting. When a pork loin is cured it becomes bacon and is also known as back bacon. The tenderloin also known as pork loin fillet is located underneath the loin and is the most tender muscle on the animal due to the muscle being hardly used.

Is one of the most used cuts as you can roast, dice and make sausages from it. Once cured it becomes bacon or better known as gammon or ham. Perfect for a family get together. Another fantastic cut from the leg is the pork shank. Scored and slowly roasted will result in the meat falling away from the bone.

Or known as hind trotter has a poor meat to bone ratio but is fantastic for stock or sauces.

Has a poor meat to bone ratio but is fantastic for stock or sauce.

Is a very versatile cut that is used for Barnsley chops and lamb chops. This cut has a wonderful flavour that is great for grilling or barbequing. Remove the bone, roll it into one and it becomes a lamb saddle. This makes a fantastic roasting joint.

Is a primal cut that is removed from the carcass when being cut up. Traditionally scrag end, also known as stewing on the bone, is used for soups and stews. It is one of the cheapest cuts on the lamb but offers fantastic flavour from the result of slow cooking.

Is always an exciting cut. Not only does it look amazing when French trimmed it has a juicy sweet taste to go with it. Fantastic when roasted and ideal for dinner parties and romantic nights in!

Also known as short forequarter is a very versatile cut that is brilliant for stewing, braising and slow roasting. Probably one of the most flavoursome cuts if cooked slowly.

Can either be cut into chump chops or can be de-boned so you are left with a solid piece of meat, which is called a lamb rump. Both have tremendous flavour with the chump chop ideal for grilling and the lamb rump ideal for roasting.

Also known as lamb neck fillet is a well worked muscle, meaning this particular cut needs to be slow cooked. This cut has tremendous flavour and is fantastic for braising or casseroles.

Traditionally the most popular cut due to its tenderness and tremendous flavour. Preferably served on the bone but can also be boned and rolled. Ideal for roasting or why not get it butterflied and BBQ it. The meat off the leg is also ideal for dicing.

Is the cheapest cut on the lamb and is used for mince and burgers. However, in recent years the meat from the breast has been commonly used for the kebab trade.

Are commonly used for diced stewing or stewing steak. However, with its internal fat it makes a flavoursome lean mince or burger.

Fore rib or rib on the bone is traditionally known to be one of the most flavoursome parts of the animal. With its fat covering and excellent marbling texture, it offers you a meal to remember. The ribeye steak is also located here and is probably the most flavoursome beef steak.

Often known as stewing, braising or chuck steak and is traditionally excellent for dicing. This meat is fantastic for slow cooking or casseroles. Also make incredible mince and burgers.

Is traditionally known as a cheaper cut on the forequarter. It’s ideal for slow cooking and primarily used for mince and burgers.

Is used primarily for slow cooking and soups. Due to the toughness of the cut it is not usually served any other way.

The lean meat from the thin rib is primarily used for stewing, mince and burgers. Thin rib is also known to be called the Jacob ladder. With it having the right amount of fat the meat stays moist whilst cooking on a slow heat. Perfect for slow cooking.

This particular cut is cut from the rear back portion of the animal, continuing off the short loin from which the T-bone is cut. This cut can be used for sirloin steak or rolled sirloin. Both have fantastic flavour and are perfect for special occasions. The fillet which is located underneath the sirloin is the most tender muscle on the animal because the muscle is hardly used. The Chateau Briande which is located at the top of the fillet is the most flavoursome and is normally used for special occasions or romantic meals!

A relatively long, lean and flat cut that is used for mince and burgers. Fantastic flavour.

A very lean meat that is a little firmer in texture than fillet. However, it has more flavour and can be cut into rump steaks, strips or even diced. The rump was traditionally served on the bone but in recent years people prefer the rump boneless and cut into steaks.

Is traditionally cut into joints with a layer of cod fat to keep the moisture in the meat. Ideal for a Sunday roast.

Is traditionally cut into joints with a layer of cod fat to keep the moisture in the meat. This joint has fantastic flavour and is perfect for salt beef and roasting. The aitch bone is also is located here and with its coarser texture it gives you a unique flavoursome taste.

Also know as top rump is manly used for mince and dicing. This cut is very lean and can also be used for minute steaks or frying steaks.

Is one of the toughest cuts on the animal and has to be cooked slowly to break down the meat. However, with its fantastic flavour it is worth the wait.

Discover the intense flavours of our dry aged meats.

It seems to taste better knowing the food is locally sourced and supports local farmers. 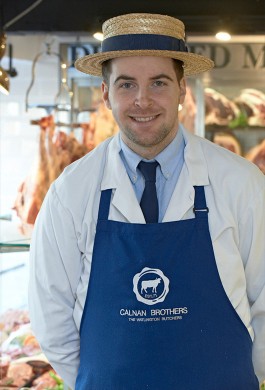 We are a family business and we take great pride in providing a friendly, helpful and high quality service. I would like to take this opportunity to say, thank you to all of our customers that have supported us over the years. We are dedicated to improving our service. 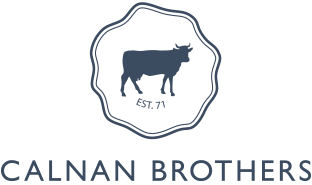